Nearly everybody in our industry knows the AES article about nearfield measurements of Don B. Keele introduced in 1974. In his article, he described a way to make a nearfield measurement of a speaker and he compared it with the farfield response of the same speaker. He came to the following conclusion: 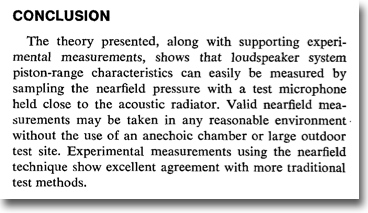 Based on that conclusion, a lot of speaker engineers started using the nearfield measurement of a woofer to stitch it together to a farfield measurement made in a anechoic chamber. This was to overcome the limitations of a real world chamber at low frequencies (below 100-200Hz, depending on room size).
Unfortunately, many did not take into account that a nearfield measurement of a todays size loudspeaker does not represent the farfield result even at low frequencies. The limited front baffle has a major effect on the farfield response.
Funny enough, Mr. Keele included that already in his article:

He mentioned “half space” and that means the speaker should be on a big baffle. But normally a speaker box is measured free standing in 1m distance, and that’s full space. The difference to a half space measurement is huge! 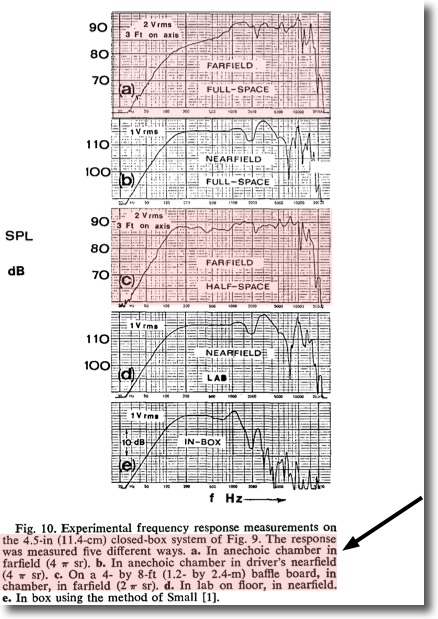 Mr. Keele showed clearly what he measured – you just have to carefully look at it.
The speaker tested in this example was a 4.5″ in a cubic enclosure of roughly 22cm. The farfield result can be seen in measurement a. The nearfield result in in b. In c, the small enclosure was mounted into a bigger baffle of roughly 1.2×2.4m to “support” the the small enclosure. Only now, nearfield and farfield looked similar.

It can be said that the work of Mr. Keele is still valid and true, as long as everybody understands that nearfield and farfield measurements are only comparable if you have made the farfield under half field field conditions or found a method to recalculate a nearfield measurement into a farfield version.

A good exercise to understand the influence of the baffle to the farfield response curve is the nice little program called “The Edge”. This free goodie can be used to calculate a baffle step compensation, but also shows nicely the effect a limited baffle size has already at low frequencies. There are other nice free programs at the same site – it’s worth going there.

All quotes of Mr. Keele have been taken from his original article, the two pictures of EDGE can be found on the web site of Mr. Tolvan. Part 2 will show a way to re-calculate nearfield measurements into farfield versions.

This site uses Akismet to reduce spam. Learn how your comment data is processed.

Send me a message